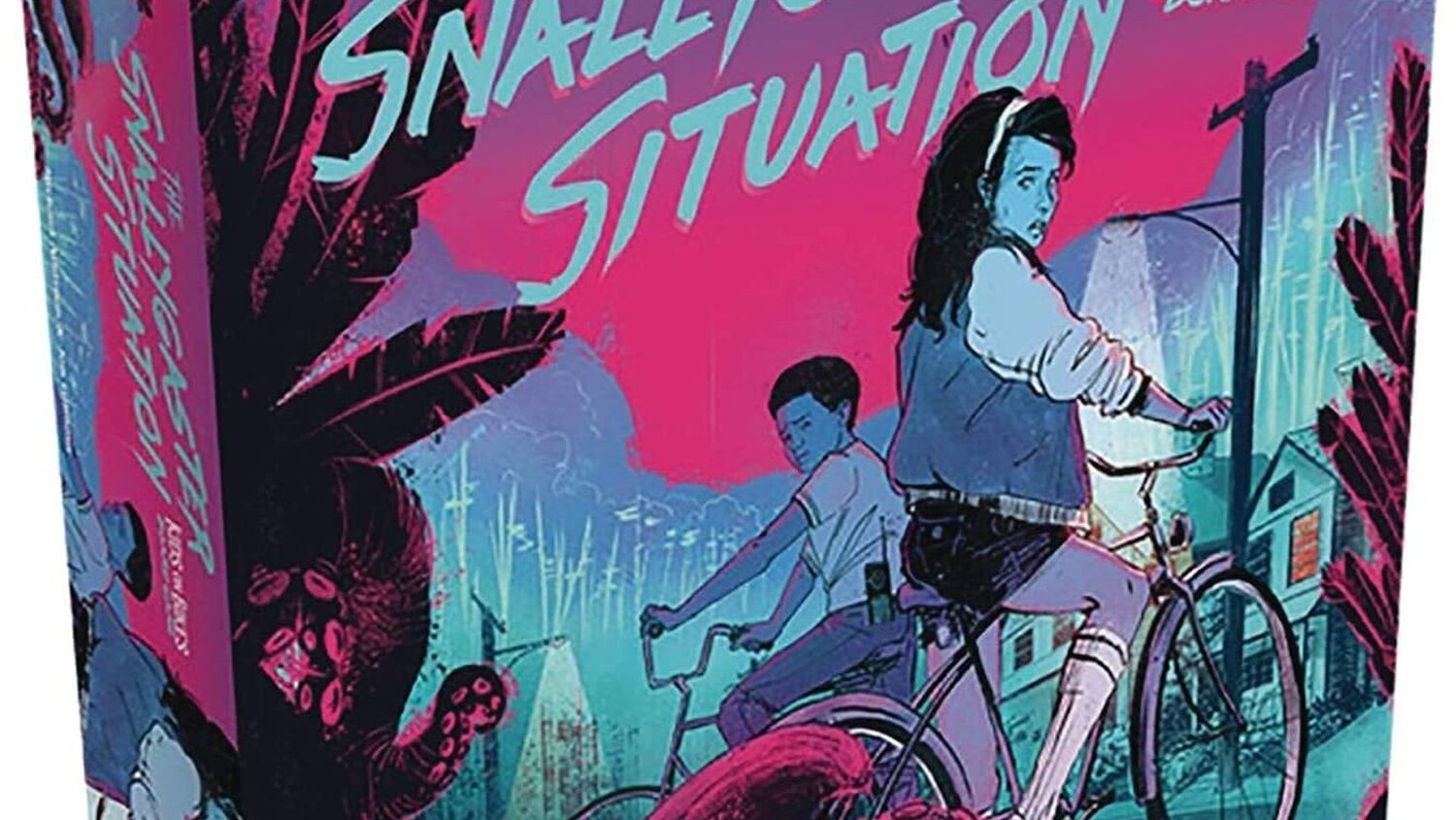 The Snallygaster Situation is a new cooperative board game from Jon Gilmour and Michael Addison published by Renegade Game Studios. The game takes place in the universe of Kids on Bikes and allows 2-5 players try to defeat supernatural monsters that invade their town. You can order a copy of the game from Renegade with an MSRP of $60. Renegade was kind enough to supply me with a copy of the game to review and I’ve included my thoughts below.

You know it, but nobody believes you! Especially not the “adults” who dismiss you for being a kid. You’ve started to notice strange sounds at night and now that new kid at school has vanished. You’re sure that a hideous creature has been unleashed on your town—and it’s up to you to defeat it!

In The Snallygaster Situation, you and your best friends must face off against one of four diabolical monsters set on destroying Lakeview—and possibly the entire world! Get on your bikes and search for clues about the monster’s weakness, find the missing kid it has abducted, and end the threat to your home town!

In The Snallygaster Situation, one player takes up the role of a Lost Kid while the others are children looking for their friend. The player who plays as the Lost Kid has the job of providing clues as to where they are and using their cards to prevent the selected monster from hurting everyone. The game actually feels a lot like Stranger Things, particularly the first season. Once the Lost Kid is found, they actually get some kind of special ability like telekinesis to help. Meanwhile, the other kids gather items and go around town on Rides that provide them with abilities to help find their friend and deal with the monster. The Rides are actually a lot of fun and range from Sparkles the horse to The Hawk skateboard, or several different bikes.

One area that helps the game stand out is that it comes with 4 different monsters that you can go up against and each one is very unique in how to go about solving them. I played with the Jersey Devil and Bloody Mary in my playthroughs and both were fun for different reasons. However, I do want to note that one of my complaints is with the Jersey Devil’s special board. In that scenario, you need to add symbol tokens to a special board with 8 spots in a 3×3 grid but one of the corners is missing. The trick is that if you place 2 tokens with the same symbol in the same row, column, or diagonal, you advance the Doom Marker by 1 (you lose if Doom hits a certain point). This means it is literally impossible to not incur at least 1 point of Doom while doing this part of the puzzle. There are already so many other ways to incur Doom, that I don’t think this was needed. Maybe let the players put them diagonal?

The game comes across as very complex at first glance, but in actuality, it’s not bad. A friend who played with me said that she finds Munchkin to be more complex than The Snallygaster Situation. On your turn, you can move, do a Search action if you’re in a building, and use any items. That’s fairly simple. However, there are a fair number of moving parts like the clues from the Lost Kid, the movement of the monster, federal agents that can catch you, and the mini quests that you need to do for your monster.

The art for this game is a lot of fun. A lot of the art and event he art style feel to me very much like it’s from the ‘80s which is perfect. Heather Vaughan and Scott O’Gara did a fantastic job in this department.

The game states that you can play this with as few as 2 players and this is true. It’s not my favorite 2-player experience and the game is better with even 3 players (even though the number of characters is the same), but it’s also not the worst 2-player experience in a board game.

Overall, The Snallygaster Situation is a fun cooperative board game. I enjoy the mechanic of the Lost Kid who controls the monster while having to provide clues to their whereabouts and then becoming a super powered force when found. The art is fun, the Rides are a lot of fun, and I love the aesthetic of the card backs looking like composition notebooks.

All Pirates of the Caribbean Movies in Order